The Highlands are ours:

First half goals from Miles Storey and Greg Tansey were enough to see off the visitors as Inverness closed to within two points of neighbours Ross County.

The Caley Jags had Raven and Tremarco in the full back slots as they went seeking their 1500th goal. Ross County had a surprise omission with striker Liam Boyce out with an injured hand, Alex Schalk given the task of getting the County goals in the New Year derby.

The home fans were in fine voice as the sides came out on a warm 2nd of January afternoon and the drums were beating a pulsating rhythm which would transfer onto the park to keep the players energy levels high.

It was the visitors who looked sharper in the opening exchanges and Rocco Quinn might have done better than to fire over from an inviting position after seven minutes. David Raven did likewise a few minutes later at the other end but it was County that were making most of the early play.

Quinn and Martin Woods missed in quick succession as we rode our luck a little and Craig Curran was replaced with Brian Graham before twenty minutes were up because of an injury, but the home side were beginning to get to grips with the pace of the game.

With 25 minutes gone Inverness took the lead. A corner was knocked out of the box and James Vincent returned it goalwards. Miles Storey was alert enough to re-direct the ball beyond Scott Fox from close range to open the scoring. Tough on County maybe, but they were made to pay for earlier missed opportunities.

With half an hour on the clock, Ross Draper failed to keep a header down from a corner as the ball went over the bar.

Five minutes before the break, Andrew Davies had a header saved by Owain Fon Williams as County tried to get back on level terms, but it was Inverness that would go in at the interval much the happier side.

Greg Tansey took a free kick wide on the left after Wedderburn had been fouled. He directed his cross come shot towards the danger area and with two or three missing the ball, it bounced through everybody and ended up in the net.

That was the final action of the first half and Inverness had stolen a march on their rivals with that second goal in stoppage time.

Now then, 2-0 has been a dangerous lead for us in recent games but we were in no mood to let this one slip. We had rolled our sleeves up during the beak and came out snapping at the visitors heels, not allowing them to settle on the ball.

Yogi hooked Wedderburn soon after the break looking to get Iain Vigurs to control the pace of the game. This seemed to work well and County would get little joy in the second half.

Michael Gardyne was having little joy but he did get a shot away from a tight angle which Williams saved at the expense of a corner.

Alex Schalk was ineffective as a replacement for Liam Boyce and he was replaced by Raffaele De Vita as Jim McIntyre shuffled his pack.

Martin Woods had a couple of shots saved by Williams but it was Liam Polworth who should have scored the next goal. Great play by inverness around the box teed up Polworth who tried to guide his shot into the top of the net. Unfortunately he directed it past the top corner of the net.

Vigurs also chose the wrong side of the post as the game raged from end to end and the drum beat got louder, the full repertoire unloaded on the fans ears.

Miles Storey had been running the County back line ragged and he almost scored a spectacular third goal. He whistled a rasping shot high at the goal, but Scott Fox made a finger tip save to divert the ball onto the bar as Inverness looked to kill off the game.

Gary Warren tried an acrobatic overhead effort but the keeper had it covered as Inverness played the game out in front of the North Stand, County reduced to speculative efforts and wayward free kicks.

Mutombo came on and had time to lash a sot wide from an acute angle. Might have been better lifting his head and looking for a team mate but it mattered not a jot. The Highlands were ours once more.

Maybe a tad fortunate to open up a two goal gap in the first half, but our second half performance was tremendous and we ran out comfortable winners in the end. Miles Storey was my Man of the Match, giving the County defence a torrid time of it, scored one and almost added a second but for a great save by the keeper. Ross Draper was also impressive and another great display from Liam Polworth who should have scored as well. Defensively solid and the clean sheet was a massive bonus. 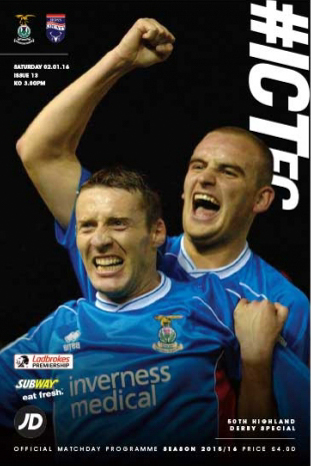