Down Down Deeper and Down:

A Status Quo song kept coming into my head after watching us slip to another defeat against one of the relegation contenders. Yes, we really are in the shit.

Hamilton somehow won the game 0-1 despite us having numerous chances to score but as is the norm these days, we failed to trouble the keeper and paid the price for over elaboration around our own box.

Carlton Morris notched the only goal of the game as the visitors broke forward after Ross Draper lost the ball.

A crowd pulling initiative brought plenty of youngsters to the game with the away end sparsely populated, the Accies fans reluctant to travel far to watch this drivel. I don't blame them to be honest.

Yogi's hands are tied at the moment with suspension and injury robbing Inverness of a settled side. Warren and Tremarco were suspended and Meekings, Raven, Vincent, Doran, Mutombo, Brill, Fisher and Co remained sidelined.

This meant a big shuffle for Yogi and he went with three at the back in a bid to accommodate those that were available.

As expected the game would turn out to be a non spectacle in the first half, although I have seen worse this season. We did start the better side but it did not take long for the visitors to keep the ball and restrict our forward intentions.

However we did forage up the park after fifteen minutes but Liam Polworth blazed a shot over the bar from outside the box when he possibly could have gone deeper into the Accies area. It started to look promising and Jordan Roberts did likewise a minute later. Here we go!

Gramoz Kurtaj had Accies first chance of note after twenty-two minutes when he shot just wide, and just before the half hour Michael Devlin might have done better than miss the target with a header.

A tribute for Ross Lyall was observed on the thirty minute mark, one minute for every year that Ross lit up this planet with his zest for life. The sixty second applause ringing round the stadium.

The game was dire and the play was littered with petty fouls all over the park as both teams struggled to fashion out any clear opportunities, however, just before the interval Dougie Imrie latched onto the ball some 35 plus yards out and his vicious shot whizzed a couple of yards over the bar. Plenty of power as you would expect from the wee man, but not the accuracy.

The half ended with Jordan Roberts firing over the bar in an instantly forgettable dirge of a game.

We again started the better and Iain Vigurs should have scored with a header after the ball was planted on his head from a Williamsr cross on the left, alas, he tried to glance his header and it went well wide of the keepers left hand post.

Inverness were on top of the game since the break but Kurtaj sent a warning as he headed over when Accies broke away.

The warning was not heeded though and on the hour Hamilton scored when we lost the ball and Carlton Morris benefited from a Greg Docherty pass to score across the keeper and in off the far post.

That was a disaster for Inverness as we all knew what would happen now. Time wasting was a top priority for Hamilton and you can hardly blame them in their predicament, but our inability to put the ball in the net is worrying, in fact we need to get the ball on target before we can dream of scoring.

Tansey shot over as our urgency began to sink in and Yogi shuffled the already shuffled pack once more. Jordan Roberts being replaced by Richie Foran. Miles Storey would be next to come on as Liam Polworth was hooked, but Accies were doing their level best to disrupt play at all costs. Petty fouls and substitutions were the only things that broke the monotony of time wasting as McGovern took every goal kick to the opposite side of the box and Imrie getting as far away from the dugout before being subbed. Yawn!

With Foran on we looked a bit more direct but were always going to be susceptible to the odd breakaway and we had Fon Williams to thank for keeping out one such attack as he blocked a low shot from sub Darren Lyon.

We went for broke in the last quarter but a couple of times the ball would just not roll for us in the box. A couple of melee's and stramashes followed but nobody was able to dig the ball out from the congested Accies penalty box. The final straw came in another scrambulation (I like that new word) when Nat Wedderburn poked his toe at one such bobbling ball in the box, but it bounced off the keepers left post and that was the straw that broke the donkeys back.

Fair play to us, we kept going to the end but it was apparent our luck was out today as Tansey blazed over, as did Draper and a Devine header sealed our fate.

Well done Hamilton, the masters of time wasting, niggly fouling, timely play acting and disruption. I'm not being bitter, just realistic. We have brought all of this on ourselves and nobody else is to blame. I understand our plight with injuries suspensions etc, but we do have players capable of better. Our back line would not have started today had we had all of our players fit. That's football and we have to get on with it I'm afraid. In saying that, we have played worse and won, but it was back to the typical Hamilton v Inverness encounter after the last one broke the mould.

Best of a bad bunch were unlikely contenders in Nat Wedderburn, thrown in at centre back but stuck to his task and always tried to play football. Lewis Horner who is growing on me and Ross Draper who will be disappointed at the goal. Fon Williams did well but was left exposed at the goal. Foran injected some urgency once he came on but it was too little too late.

That result leaves us in the mire. Accies have drawn level on points with us and with Killie losing they stay five points adrift in the relegation play off place. Yes, that word relegation has overtaken the top-six word.

We can do better, but that needs to start right now, beginning with a result in the Cup against Hibernian to boost our confidence, however avoiding relegation is the important thing here or it will be a bit of Status Quo whether we like it or not. 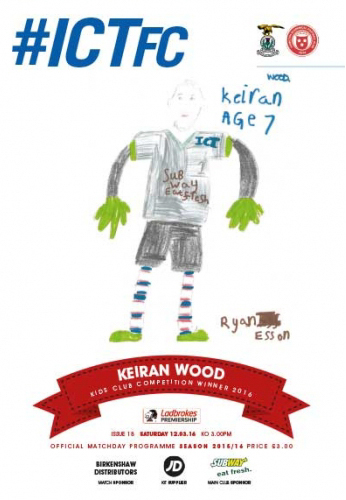