After Jordan Roberts sensational injury time goal against Motherwell in the cup, Karma came back to bite us on the arse as Motherwell turned a draw into three points with a last second breakaway goal to snatch all the points and consolidate their top-six ambitions. Marvin Johnson scored when Inverness were pushing for the winner and his break saw the defenders scurrying back in vain as he raced through and slotted the ball beyond Fon Williams in the 94th minute, a result that has all but confined Inverness to the relegation contest.

A bright April afternoon saw Inverness line up without the suspended Greg Tansey, the more attack minded Andrea Mutombo being the only change from the side that trounced Ross County a fortnight ago.

Motherwell were without the injured James McFadden and Stephen Pearson, but the dangerous Scott McDonald and Louis Moult started with Lionel Ainsworth on the bench.

The opening exchanges were bright without troubling either keeper, but the dazzling footwork of Andrea Mutombo was a joy to behold as he waltzed around the Motherwell defenders. Unfortunately none of his own team mates knew what to expect and more often than not he would be crowded out by the resolute visiting defence.

New Scotland u21 cap Liam Polworth drove one just over the bar after twenty minutes as the posturing continued and it looked promising for Inverness with Mutombo bamboozling everyone, including himself.

Liam Hughes got a header on target as Inverness began to press but he could not get enough purchase on the ball and it was an easy gather for Ripley in the Well goal and Mutombo flashed a shot over soon after.

Hughes had another header saved before Marvin Johnson narrowly missed with a header low to the left as the game opened out. At the other end Miles Storey went just as close with a similar effort, unfortunately the end result was similar as well and the half closed all square.

Same pattern in the second half and Mutombo fired over once more.

Mark McGhee made the first alteration bringing on Lionel Ainsworth and Jack Leitch for Cadden and Gomis with fifty-three minutes on the clock, but it was the home side that threatened with Hughes and Meekings heading over.

Just after the hour Motherwell took the lead in bizarre fashion. Fon Williams needlessly flapped at a cross from the left and when the ball landed near the feet of substitute Ainsworth, his scuffed shot sliced up in the air. It still looked as though we might get away with it, but with a man on the line, Fon Williams scrambled back but could not keep the ball out as it crept under the bar and into the net, along with the defender. Freaky!

We took only eight minutes to restore parity. Andrea Mutombo had a shot saved just after the goal but on seventy minutes Ross Draper belied his size as he dropped his shoulder bursting into the box and was promptly scythed down by the clumsy Keith Lasley. Stonewall penalty and Iain Vigurs stepped up to draw Inverness level, the keeper making his mind up early to go to his left, the ball going the opposite way.

Two minutes later and Tremarco stole in at the back post and redirected the ball across the face of the goal, unfortunately just wide of the far upright as we looked likely to take the lead. Five minutes on and Ripley did well to block as Tremarco made ground into the six-yard box, his attempt smothered by the keeper and a defender.

Vigurs and Mutombo had efforts at goal as Inveness went for the win in the last ten minutes and that would be our downfall. Damned if you do, and damned if you don't.

Deep into injury time Inverness were still searching for a winner, but after winning a corner Motherwell cleared the ball and Marvin Johnson showed a clean pair of heels as he sped goalwards from his own half. Two defenders were left in his wake and he coolly slotted the ball round Fon Williams and into the net for the winner. Gutted,meh!

There was only time left to kick off and it was game over for a frustrating afternoon for the home fans. The visitors were rightly ecstatic and they have virtually confirmed their top-six position.

Oh dear, we managed to snatch defeat from the jaws of a draw. Fair play to Motherwell who weathered the onslaught and did what they had to do, but it was a frustrating afternoon for the Highlanders. We can't complain though having meted out similar punishment in the cup game. However, once more we failed to make the most of our superiority and paid the price. Fon Williams needs to take a look at his part in the first goal. Not good enough for the SPFL never mind the Euro Championships. In all honesty it was a fairly open game and one we looked like winning. We lost a freak goal and a breakaway at the end with no time left to recover. We will play worse and win, but the result did not justify the effort. However, the long knives are out as peoples memory fades. That Scottish Cup win is a long time ago it seems.

tm4tj MotM is going to Andrea Mutombo who was best aided by Carl Tremarco. Mutombo teased the Well all afternoon with his darting runs and quick feet. Unfortunately Motherwell eventually sussed him out and crowded him out on a number of occasions, but he was a delight to watch. If only one of our players knew how to help him out it would have been a dawdle. Tremarco almost ghosted in a couple of times and backed up the attack well. Draper did well to win the penalty after a slack first half but he grew into the game.

A couple of testing games coming up within the week. At home to Hearts on Tuesday and away to Dundee United next weekend. Let's get out there and back the team in this miserable climate 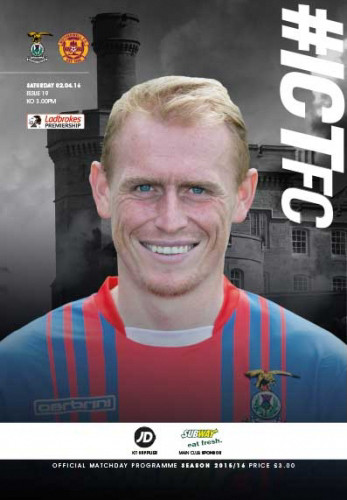