Iain Vigurs started in the only change from last weekend with Danny Williams starting on the bench. The usual low attendance for a League Cup televised game was evident and the other change was our strip, playing in our away colours.

A bright opening for the home side as they tried to banish the blues after a dreary ninety minues against St Johnstone.

After ten minutes, Storey broke into the box from a ball slipped through the defence by Polworth, but as the keeper stood tall, Storey shot weakly at him and the chance was gone. Great opportunity to open the scoring and the young striker will be aggrieved that he never did better.

Inverness were dominating the possession and Tremarco broke on the left. His cross was back headed by Storey but the defender was right behind him to block it. More persistence saw Inverness gain a free kick on their left side and Tansey's effort was deflected for a corner which came to nothing.

Fifteen minutes gone and more had happened in this game so far than the entire ninety minutes last Saturday. Ryan Christie was prominent at the heart of every Caley Jags probing and was always looking to thread someone in.

A quick throw out saw Polworth stumble on the ball as it hit his heels and Woods got a shot away, but it was deflected for a corner. Boyce could have done better with a header after 20 minutes, but he angled it just wide as County got to grips with the game, and Fon-Williams had to look sharp to deny the eager County strikers from a dangerous cross as he stooped to gather it.

Martin Woods was denied by the bar with a stunning strike from thirty yards which dipped and sliced over Fon-Williams but smashed down off the bar and away to safety. A bolt from the blue and it almost broke the deadlock.

The game was racing from end to end and there was plenty of action to keep the fans entertained. Half an hour gone and the game had evened out with both sides giving it a go, Ryan Christie receiving some rough treatment from the County midfielders.

Iain Vigurs took some retribution and a deserved booking for a clumsy tackle on Gardyne but the free kick was easily cleared. The game was getting broken up with some petty fouling as the half time whistle approached and the crisp passing from the first quarter had disappeared.

We really need to do something about our quality at throw-ins. Another one taking an eternity to see through and once more the ball lost cheaply. It's almost an advantage for the opposition when we gat a throw-in.

Carl Tremarco gave away a free kick five minutes before the break and Christie skimmed a header behind for a corner. From the corner, Jackson Irvine stooped to head cleanly into the net as the defence stood watching with nobody on the back post. Criminal! Good goal for County, sloppy from Inverness. You have to say that goal was coming before the break as County were getting on top of the midfield as we ran out of ideas early.

Liam Boyce was first to try his luck after the break as he created a yard of space but fired over the bar from a tightish angle. But the warning signs are there and moments later a Gardyne shot is deflected behind Fon-Williams by Danny Devine after the keeper looked to have it covered. Game over, and Dingwall almost sealed it with a flashing header that went just over.

Storey burst down the right but his cut back was missed by Vincent and straight to the other end where Fon-Williams fingertipped a shot behind at the expense of a goal kick. Meh.

Devine almost gifted a third for County losing the ball in the right back position. When County worked it into the box, Gardyne was thwarted by a diving save from the home keeper. Another let off for a struggling Inverness.

Martin Woods caught a booking for clipping Christie as Inverness tried to respond and Devine nodded a Tansey free kick just behind.

Jackson Irvine was leading our midfield a merry dance as he strutted his stuff and drove County forward at every opportunity.

Horrendous phase of the game for Inverness and Fon-Williams joined in the comedy as he let the ball fall from his grasp as he tried to throw it out then changed his mind. It's difficult to watch now as County look more likely to score a few more goals.

Storey shot tamely into the keepers hands as he tried a rare shot, but it was not going to trouble anyone before County continued their dominance.

Disaster struck once more as Miles Storey went down clutching his leg after a challenge from Robertson and everyone held their breath, but he was able to continue after some treatment.

Tansey was next for the fresh air shot as he acrobatically missed an overhead kick. Oh how the County fans were enjoying this.

Substitute Danny Williams fired a low ball into the box and a Ryan Christie flick almost went in, but it hit the base of the post and bounced into the keepers arms. Better from Inverness though.

More punishment for Christie in midfield as he was once again targeted. With fifteen minutes left, it looked as though Inverness were out of the competition. Some good work by Williams and Storey on the left saw Inverness win a corner as Christie was manhandled to the ground once more.

Nothing came from the corner, but once more we worked hard on the left and when the ball arrived at Tansey's feet some thirty yards out, the folk in row P in the North Stand ducked. No need to though as Greg hit a daisy cutter into the bottom corner.

Inverness had woken up and another run forward by Christie saw him upended thirty yards out but nothing given. Plenty to play for as one more goal would set up extra-time. Christie was again clattered by Davies as Inverness searched for a leveller, but Tansey's free kick was too high for Devine who was adjudged to have been fouling anyway.

Into the last ten minutes and the hosts had the impetus now, but one more for County would finish it and they knew it as they slowed the pace of the game making time wasting substitutions to eat away some valuable seconds.

Tansey went close as he drove towards the box on the right side, however his shot across the keeper went a yard wide. A corner went abegging as well as the game went into 4 minutes of time added on and County used their noodle to waste more time near the corner flag.

Woods blasted a free kick well over as time slipped away from Inverness and when Tremarco fell over the ball again the game was up.

Too little too late from Inverness and County deserved to go through against our makeshift side. We started well, finished well, but had little to offer in the middle hour of the game. Slack marking allowed Irvine his free header and a bit of misfortune for the second, but we could not complain at being only two down as County dominated the middle section of the game. Great finish from Tansey but overall, we did not do enough to take the game to another half hour. A not unexpected result, but nonetheless still hard to take given our recent troubles and little light at the end of the tunnel.

MotM for Inverness was Ryan Christie who took a lot of stick from the robust County markers and was unlucky not to score with a neat flick late on.

Where now for Inverness as County go into the hat along with St Johnstone. Well, it's league action on Saturday in what is looking like a must win game for us as our season disintegrates. 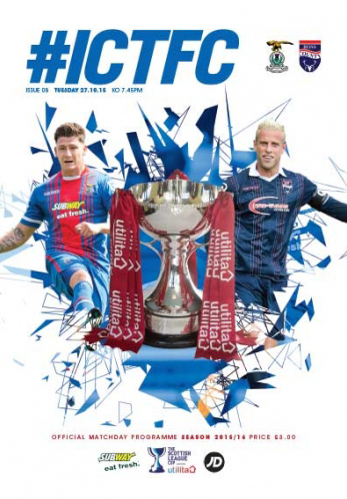