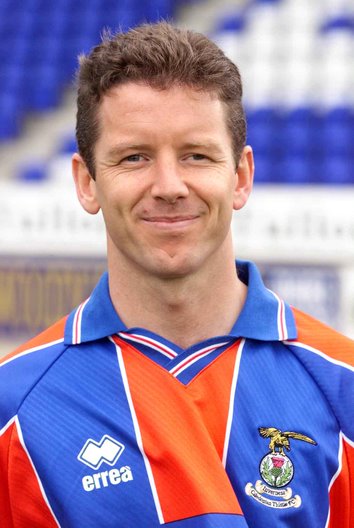 Charlie Christie made 314 appearances as a Caley Thistle player, including a man of the match performance in THAT game against Celtic in season 1999/2000.

Charlie had signed for Celtic in 1987 from Inverness Thistle but never made any first team appearances although he was a regular for their reserve side. He returned North two years later to sign for Inverness Caledonian in the Highland league in 1989. He made his debut for Caledonian Thistle on 3rd September 1994 in a 1-0 win at Albion Rovers in the 3rd Division. The rest is history...

When Craig Brewster resigned as manager in January 2006 to return to his 'spiritual home' at Dundee Utd, in the same way as his predecessor John Robertson had returned to Hearts, the Caley Thistle board decided that it was time to appoint a manager who had ICT in his heart.

Having been at the club since it was formed and involved not only in fundraising through the Centenary lottery but also coaching, Charlie Christie was the chosen man.

His managerial career spanned 63 games and he won around a third of these including an excellent 5 game winning streak at the end of season 05/06 where ICT won all 5 post-split fixtures without conceding a single goal (an SPL record).

He resigned after three games of the 07/08 season citing family reasons and returned to a behind the scenes role at the club.

Charlie's son is Ryan Christie who starred for Inverness before joining Celtic and has been capped for Scotland.