Inverness, Scottish Cup Winners! How good does that feel!


What a day that was, one that started for me at five in the morning when the alarm went off in North Kessock and ended in Edinburgh around midnight with a grin etched on the face. Inverness Caledonian Thistle are the 2015 Scottish Cup winners.

Many made massive sacrifices for the cause, coming from around the globe. It was well worth it in the end, although in true tradition, we don't do anything the easy way and that was credit to Falkirk who can count themselves a tad unlucky after a courageous second half performance where Inverness weathered the storm to eventually lift the cup after having to play out the final twenty minutes with ten men.

We went in at the break a goal to the good after getting to grips with the game halfway through the first period, Marley Watkins finishing with aplomb after a seven man move. Carl Tremarco was sent packing after 75 minutes after he miscontrolled a ball and then scythed down Blair Alston as he sped goalwards. Schoolboy error from Carl that was punished five minutes later when PeterÂ Grant headed powerfully home from the vacant left back position.

However, an unlikely hero came forward and James Vincent applied the finishing touch after Jamie MacDonald spilled a Watkins shot.

The rest is history.

The fans were in good spirits in the build up to the game and plenty of shouting juice had passed the lips. Inside the stadium there was a marvellous card display from the Inverness end and it was a pleasure to be part of it. Massive congratulations to all who set that one up, it looked fantastic.

Inverness fans were dealt a blow before kick off as semi hero David Raven was out which left us with an unfamiliar back four. Esson in goal but in front of him, only Josh Meekings was in his normal position. Devine replaced the suspended Gary Warren and Carl Tremarco was at left back with departing captain Graeme Shinnie filling in at right back with Raven missing. Danny Williams was on the bench and Aaron Doran started.

Falkirk were minus the cup-tied Mark Kerr and John Baird, but Rory Loy started, despite Houston claiming he might not make it.

A bright afternoon saw Falkirk get off to the better start, but it was a typical cup final, all a bit cagey in the opening exchanges, nobody wanting to make the first mistake. Whilst always keeping the fans attention, there was little goalmouth action with defences on top as Inverness began to edge their way forward with around twenty minutes gone.

Ryan Esson was eventually called into action and comfortably saved a low shot from Will Vaulks from outside the box. Vaulks fired a vicious shot from thirty yards eight minutes later and that one had the Falkirk fans off their seats as the ball ruffled the top corner of the net. Alas for the Bairns, it was the wrong side of the net. Closest call yet though, phew!
We were not at our best but at least we were not behind. That close shave seemed to alert Inverness to the dangers and Aaron Doran brought a save from Macdonald as we started to pass the ball better, although the defence were needing more help from the front men who were not holding onto the ball.

Shinnie then had our best attempt so far as he fired a shot come crossÂ wide with Watkins lurking,Â and it was evident the tide was turning. Watkins thenÂ had a shot saved as it went straight at the keeper and a corner followed soon after.

We were now controlling the pace of the game and the 38th minute saw Inverness go ahead with a wonderful team goal. Falkirk lost possession deep in the Inverness half. We transferred the ball smartly up the right side in a seven man move. The final touches saw Aaron Doran slip a tidy ball through to Marley Watkins and his pace and power saw him drift goalwards to slide the ball past MacDonald for the opening goal.

The dream was now in full swing as the half ended with Inverness on top.

I don't know what Houston said at half time, but it transformed the Bairns. They were up for this and we would have to weather the storm as they surged forward looking for a leveller.

Vaulks was the main threat and he went close agin five minutes after the restart. On the hour mark and Blair Alston lifted a shot just over inside a packed box as Falkirk upped the pace.

Inverness were by now finding the Bairns to be more of a handful than they should have been as they won successive corners and Vaulks again shot over. Substitute Botti Bia Bi went very close soon after and manager of the year John Hughes decided to make a change. Little did he know how important that change would be as he introduced James Vincent for young player of the year Ryan Christie.

With 75 minutes on the clock, Carl Tremarco was invited to leave the field by Willie Collum after he lost the ball then brought down Alston. No complaints this time though as Collum had little option. Tremarco was distraught and Inverness would have to play out the game with ten men.

Vaulks again tested Esson from close range as the Bairns smelled blood and went for the jugular. Inverness were reduced to frantic defending and the fans were watching through their fingers as the final twenty minutes would take a lifetime to pass.

Within five minutes of Tremarco leaving, Falkirk were level. A free kick on the left flank saw Alston pick out Peter Grant who wanted it most and he flashed a powerful header high into the net for a not undeserved equaliser. Game on.

James Vincent went to right back with Shinnie moving over to the left as Inverness re-jigged after the sending off. There was nothing else for it but to get up the park and have a go or face the prospect of extra time and penalties.

That threat disappeared when Watkins pace saw him break forward to surge clear of the defence with Falkirk caught up the other end. He slowed down outside the box and tried to curl a low shot to the left of the keeper. Now then, I've seen better shots but MacDonald fluffed his lines as he dived low to his left. He only succeeded in pushing the ball to the left side of the box and James Vincent who had made a lung bursting run to catch up with Watkins got to the loose ball first and knocked it into the empty net.
Absolute pandemonium in the Inverness end once more and there were only five more minutes of normal time to hold on to our advantage.

Luke Leahy went close in the ninetieth minute as Falkirk tried to scramble the game towards extra time and five minutes of time added on saw a huge sigh from the Highlanders.

Nick Ross replaced Man of the Match Marley Watkins with three minutes remaining but Falkirk could not find that elusive second goal and the end result was just fantastic for Inverness Caledonian Thistle and their fans who were singing and dancing in the Hampden Stands.

It was tough and hard to bear for the Falkirk fans who had witnessed their team give their all, but it's all about scoring the most goals and we did just that.
More scenes of Red & Blue followed as the Inverness contingent stayed to cheer the victors and witness the Cup presentation. Graeme Shinnie leaves for Aberdeen now, but he might never experience this again, as he kissed the cup and waved it above his head, duly followed by the rest of the squad.

What a moment to be a Caley Thistle fan. 21 years in the making but a combined 239 years of magnificent history.
Celebratory beers were the order of the day and I met up with some Falkirk fans in the Horseshoe Bar where Gordon MasonÂ presented me with a trophy off his back. He gave me a Falkirk shirt and wished us all well. Great fans and a credit to their club.

MotM will be going to Marley Watkins who scored the first and made the second with a little help from Jamie Macdonald.

In truth, and here is the unsavoury bit, there were not too many contenders for the title, most players having an off day. Danny Devine was better than most and Graeme Shinnie, as always, gave everything. We struggled up front and Eddie Ofere has had better days. In fairness to him, we rarely got the ball forward so it's hardly his fault. Carl Tremarco will be disappointed but he performed well up to that point. It is unfair to pick out anyone though, good or bad so I'll leave it there and say congratulations to everybody from the ball boys to the the fans, what an achievement for our club.

Steve Hislop and Bobby Mann were not far off in their predictions and I met Barry Wilson after the game as well, all in all, a great day out and there would be another one on Sunday as the Cup was paraded through Inverness. 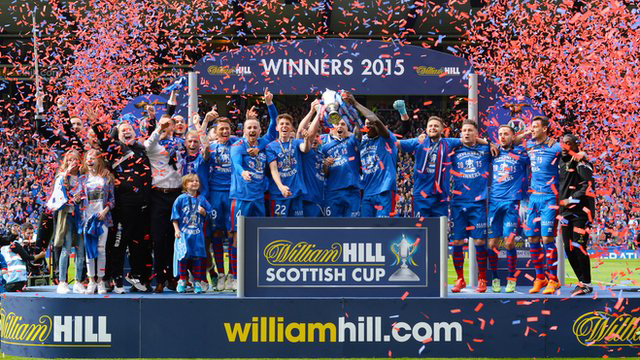