Inverness came from behind twice to snatch a 2-2 draw against Dundee United after two former Caley Jags players had put United ahead. John Rankin smashed in the opener as the Arabs went in at the break a goal up. We levelled right at the start of the second half when Liam Polworth side footed a volley into the net. Billy Mckay capitalised on an Owain Fon Williams error late on, but Lewis Horner bundled in the equaliser in stoppage time to end the scoring.

A mild but damp December afternoon greeted the players as the game kicked off with Xmas shopping looking like the winner. Yogi continued without David Raven at right back, but the bigger surprise was that Josh Meekings missed out through injury, as did Ross Draper. Lewis Horner was the man chosen to fill the position and he had a torrid time of it, but it was he who would have the last laugh as he netted the equaliser.

Dundee United fielded two former Inverness favourites, and they would play a big part in the outcome. John Rankin was recalled to the starting X1 along with Scott Fraser and Chris Erskine.

A brisk start for the bottom club and Billy Mckay almost scored in the first minute had he connected with a cross, and a couple of minutes later we had Owain Fon Williams to thank for blocking a Mckay effort from inside the box.

We forced four corners in quick succession, all to no avail despite dangerous looking crosses into the box, but no takers in blue shirts were to be found.

Lewis Horner was having a tough time of it down the United left flank. He was doing plenty of ball watching and lost his man a few times which was causing a bit of concern in the North Stand. Practically every United attack was coming through that channel and Horner was left exposed a few times.

Iain Vigurs brought out a save from the keeper although it looked as though his header was going just wide anyway.

We chose the wrong option plenty of times in the first half and did our best to help out United with a series of misplaced passes, electing to pick out players in tangerine despite our players clearly dressed in blue.

Storey brought out another save when he tried to float in a shot from the left but it was dealt with comfortably.

With twenty five minutes gone United once more capitalised on poor defending down their left wing. Scott Fraser wriggled clear on the bye line and his cut back was met by John Rankin who lashed the ball high into the net from twelve yards giving the keeper no chance.

We had a shot charged down in a penalty box scrambulation, the ball just never fell kindly enough for us. Next, Devine found himself well forward as we neared the break but his shot whistled just wide. The miss of the match came a minute before the break as James Vincent looked set to head home, but he headed wide when it looked easier to score from Polworth's cross.

Hughes would have read the riot act at the interval and it worked as we were level within thirty seconds of the restart. Danny Williams did well down the left and he picked out Polworth with his cross and he duly guided the ball into the net from ten yards.

That should have been the cue for us to kick on, but after a brief flurry we reverted to type and started passing the ball sideways and backwards again.

Iain Vigurs had a shot wide and at the other end Scott Fraser made Fon Williams work to keep the ball out.

The game went through an untidy phase with neither side creating much although Gary Warren saw a header miss to the right as the ball flashed across the goal, but United were starting to come more into the game as an attacking threat. Rankin had a shot saved and Fraser shot just over from outside the box.

But it's Xmas time and presents are all the rage at the Caledonian Stadium. A speculative cross from the left should have been tidied up by Fon Williams but he dropped the ball at the feet of the wrong man and Billy Mckay turned villain as he scored against his old club.

Gary Warren crashed a close range header off the bar as we tried to recover from this blow, and it looked all over for Inverness but we woke from our slumber once more to press for a second equaliser and another villain, Lewis Horner, turned saviour as he bundled a Williams cross just over the line.

We almost had the audacity to score a winner, but despite a late flurry of activity the game ended all square.

We snatched a draw from the jaws of defeat but it wasn't our most impressive of performances. Too many sloppy passes ruined our first forty-five and it was no surprise that Rankin blasted United ahead after getting the opening down the left wing. Horner was being horribly exposed and the big surprise was that he came out for the second half. He did however stick to his task and got some joy with the equaliser. A disappointing result and performance really against a struggling side, but at the end of the day it was a relief to snatch a draw. This was a tremendous opportunity to crawl into the top-six, but we blew it big style and this result has dropped us down the table to ninth place. All the teams from second to twelfth are capable of beating each other and this result just shows that you can take nothing for granted in this league.

My MotM goes to Gary Warren who had a couple of crunching tackles and tried his best to get a goal. Helping him out were Greg Tansey and, erm, well, that's about it. Not enough passmarks for anyone else to get a mention. 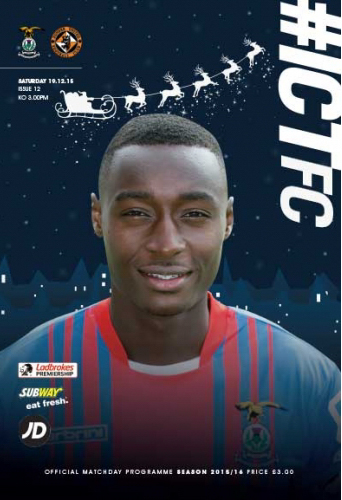