As Alanis Morrisette once said, "Isn't It Ironic". We produce an utter borefest of a performance (0-0), and still creep into the top-six once more as others around us falter.

Some people say that not all 0-0 games are boring. Well, this one topped the table in terms of boredom, mistakes, lack of creativity, lack of incident and a total lack of entertainment. Yes it was simply rubbish, even if you did pay what you can, you might be entitled to a refund. A great initiative by the club undermined by the dreadful fare on display.

Andrea Mutombo started again after a dazzling one man show against Stirling Albion in the cup and Danny Williams was in with Liam Polworth on the bench.

The crowd initiative drew in a few extra bodies hoping to be entertained. Sadly, entertainment was not on the menu so they had to make their own, and fair play to them, they kept chanting and dancing to the end, something the players should be thankful for.

To be fair to the Caley Jags, it was us that looked the more interested early on with Mutombo continuing where he left off, running and twisting his way towards the defenders, a one man box of tricks. He fired one high and wide six minutes into the game. Sadly, he would run out of tricks before the break as Thistle began to suss him out.

Miles Storey tested the keeper soon after but it was all too easy for the keeper. We were dominating the early possession, but as per usual, with little threat to the opposition goal.

Iain Vigurs also shot over in a rare moment of movement from the luxury midfielder, but chances were at a premium for the rest of the half as Partick seemed to know that we lacked any punch up front which was indicative of our pedantic style of possession boredom.

Ten minutes before the break and Gary Warren found himself outside the penalty box. He elected to shoot, maybe not his strongest point and the ball went high over the bar. This was swiftly followed by a cushioned header from Mutombo that went wide, and at the other end Steven Lawless dollied a shot into the hands of the untested Owain Fon Williams.

Vigurs was yellow carded before the break and Ross Draper passed up the best chance of the half but tamely headed over. That was about the last action of a lifeless first half and Partick would be better pleased to be going in level.

It had been a shocker of a first half, unfortunately, the second wasn't any better. If anything, it looked worse as Partick began the process of levelling out the possession percentages.

Mutombo earned a booking probably due to frustration as he was not getting beyond the defenders any more as the game entered a scrappy phase.

Not a lot happened until Miles Storey brought out a finger tip save just under the crossbar to tip over his 25 yard shot. That managed to get the crowd off their mobiles to look up and see what all the commotion was about. However it never lasted and most were back to looking at twitter or posting status' on facebook.

Liam Polworth had entered the scene, but unfortunately for him he would not be best pleased by his contribution. Storey did well down the left flank, skinning the full back and cutting the ball back to the feet of Polworth six yards out. He took a touch but could not dig the ball out from his feet and he ended up sclaffing the ball just wide of the post in the games best opportunity to make the fans happy.

What an absolute anti football game that was. If clubs want to increase attendances, then they are going about it the wrong way as teams are frightened to open out and be a bit more creative. Partick got what they came for, Inverness got what they deserved. On the park, Inverness were best served by new extended contract Captain Gary Warren, with Miles Storey looking better after the break and Danny Williams doing his best to help out.

Regardless, the young fans behind the goal in the North Stand did their best to liven the atmosphere and they can go home with their heads held high as they take the MotM award for singing, dancing and drumming up some semblance of an atmosphere, something that should have been created on the park.

Let's get this game out of the system as Hearts come North next week. I doubt they will sit back and wait for something to happen, let's hope we are prepared for it. 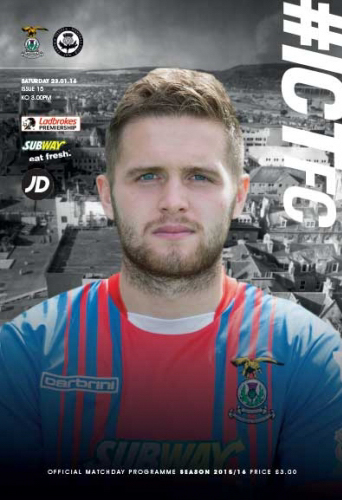