Inverness eased any lingering doubts about their Premiership status for next season with a resounding 3-1 win over troubled Kilmarnock who are now looking like favourites for the play-offs.

This game hinged on a penalty for Inverness and a red card for Kilmarnock keeper Jamie MacDonald less than ten minutes into the second half. Kallum Higginbotham had given the visitors the lead at the end of the first half and Greg Tansey put away the penalty after the break. Further goals followed from Ross Draper and the outgoing Danny Williams to put Killie in the mire and push us up to eighth in the league.

A bright but brisk Sunday morning saw the teams warm up prior to kick off and with the game being televised live there was always going to be a low crowd in attendance.

David Raven was a notable addition to the home bench and he was joined there by Andrea Mutombo who gave way to Danny Williams. Other than that, Hughes fielded the same side that drew with Hearts in their last outing.

Killie were without Josh Magennis and had prolific scorer Kris Boyd up top as they looked to get themselves out of bother.

For what was at stake, it was a rather grim first half with Kilmarnock looking livelier and Inverness content to keep them at bay.

The first effort of note came from the visitors when Greg Kiltie smashed a powerful shot a couple of yards wide after ten minutes.

Inverness responded on the half hour, and after Miles Storey raced across the front of the box, Danny Williams took over and curled a shot goalwards but Jamie MacDonald pulled off a TV save to deny the Inverness player, parrying the ball to his right.

Ross Draper might have done better after a Danny Devine knock down found the big man at the back post, but the ball seemed to bounce high and Draper awkwardly turned the ball onto the outside of the base of the post and past for a goal kick.

Five minutes before the break and Meekings fired a shot just over but just when it looked like Inverness were getting on top, Killie scored an excellent goal through Higginbotham. He started the move in midfield and fed Kiltie. He returned the ball to the overlapping Higginbotham who cut inside and placed a low shot from seventeen yards behind Fon Williams to silence the already silent home crowd. In fairness, they did break into a boo for the ear cupped Higginbotham as he celebrated his goal right on half time.

It had been a poor first period but that would change after the break as an unlikely hero would emerge from the gloom. Take a bow Conrad Balatoni. The Killie defender would take centre stage when he cocked up a pass back to his keeper. Ross Draper showed a tidy fleet of foot as he reacted to the pass and nipped in to round MacDonald. The keeper brought him down and was subsequently red carded. Greg Tansey was cool though and he smacked the penalty to sub keeper Conor Brennan's right to level things. A disappointed Higginbotham being subbed as a result showed his anger as he left the field.

Here's a pic of Greg about to put the ball low down to Brennan's right, the keeper guessing correct but Tansey had enough direction and power to put the ball into the net.

That was a game changer if ever I saw one and Inverness looked to take the game by the scruff of the neck against ten man Killie.

After some Killie pressure, Inverness got another break when a low curling free kick from Kris Boyd struck the base of the post with Fon Williams at full stretch, the ball rebounding to safety.

Meekings missed a sitter from a Storey cross as play opened out, the defender really should have done better as he met the ball at the back post and bulleted his header wide. Maybe he was too close to the post and took his eye off the ball, but it should have been the second.

Draper stabbed in number two from a knock down following a corner, the Killie defence failing to clear the ball as the big number eight turned it home.

Breathing space followed soon after when Williams ended a thirty nine pass move when he slickly cut the ball home from fifteen yards to spectacularly complete the scoring and take the wind out of the visiting sails, sending them into the doldrums.

There was still time for the obligatory scares and heart in mouth moments. Killie were not completely out of it though and they hit the woodwork again when a cross from Faubert wide left bounced off the top of the bar. Not convinced it was a shot, but it almost sneaked in, a throwback to the Motherwell game, fortunately, this time the ball stayed out. But the damage had been done and Killie were by now stretched and bedraggled as the game wore on and we looked to capitalise on numerous surges forward. However, the score stayed at that as we saw out the remainder of the game, and the home fans were pretty pleased.

The best and worst on display here. A first half littered with inactivity and a sucker punch goal and a second half full of attacking options and a tremendous team goal to round off the scoring when Williams finished a 39 man move, where ball retention was lasting for ever.

Ross Draper was my MotM. Scoring one, setting up another at the penalty and generally driving Inverness forward at every opportunity, especially in the second half. Carl Tremarco was at his best as well and Danny Williams showed what we will miss next season.

Good three points ultimately deserved but it took the penalty and sending off to ignite our fires. After that there was only going to be one winner, although Killie, to their credit, almost got a second through Boyd, but I always felt we could get another if required; It wasn't and we didn't so 3-1 it was and a welcome three points. Big cheer for David Raven when he trotted out to warm up. Take note Yogi, the fans are on his side. 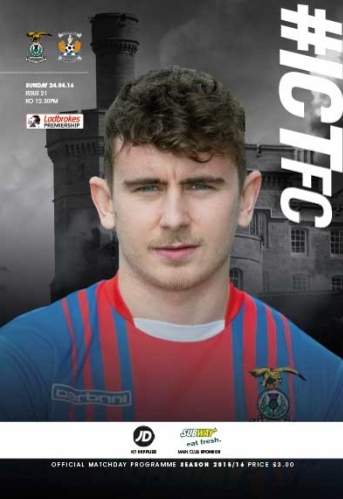