Raven signs off on a high:

Inverness recorded their biggest win of the season defeating Dundee 4-0 to round off the campaign on a high and confirm seventh place, after a torrid season. All goals came in a lively second half following a pedestrian first forty-five.

Miles Storey started the ball rolling by scoring from an acute angle just after the hour, and defender Danny Devine bundled home the second eight minutes later, closely followed by Ross Draper. Richie Foran completed the rout from the penalty spot after great work by Liam Polworth. That was despite the fans protestations looking for David Raven to have a go.

Twas a pleasant afternoon as the game kicked off with John Hughes continuing to irk the home fans with his persistence to keep David Raven on the bench. And just to rub salt into the wound, the Dundee departing Danny Williams started the game. Why, you may ask. There's nothing wrong with Danny by the way, but he has chosen to go elsewhere so why was he playing when others were kept on the bench.

It all smacks of a rift within, and one that will get worse before it gets better.

Anyway, to the game, and Inverness looked to be getting a stranglehold early on but as we were attacking without intent Scott Bain was left mainly untroubled early doors. Iain Vigurs and Greg Tansey failed to fluster the Dundee keeper with long range efforts and Dundee grew more into the battle and a couple of breakaways threatened Owain Fon Williams goal.

A swift counter between Greg Stewart and Kane Hemmings had them combine brilliantly before Stewart saw his curling effort deflect off the corner of the bar with Fon Williams stranded. A let off for Inverness.

They never heeded this though and Hemmings should have done better from twelve yards, but he lifted his shot well over the bar from prime position.

A Tansey shot five minutes before half time was easily plucked out of the air by Bain as Inverness looked to make the breakthrough, but the whistle ended the first forty-five with the score level.

The home fans were looking for more urgency and they were treated to a much better second period.

It still took until around the hour before we opened the scoring and a cracking goal it was too. Inverness pressure saw Ross Draper slip the ball to Liam Polworth who in turn slipped a great ball into the box where Miles Storey ran onto it and rounded the keeper, and as he went wide he drilled the ball home from an acute angle for a smart finish and his thirteenth goal of the season.

After sixty-seven minutes club captain Richie Foran was introduced for Storey, the reason for that would become apparent over the next few days.

The Inverness pressure had been building since the goal and when Iain Vigurs sent in a decent ball from a corner it looked as though Foran nudged it on and Danny Devine bundled it in at the back post, his second goal in the last two games.

It was raining goals now and two minutes later Ross Draper capitalised on a bad mistake by the Dundee defence from none other than Nick Ross, who was mugged outside the box. Drapes then bore down on goal before slotting the ball neatly behind the keeper to leave the Dark Blues shell shocked.

Huge cheers all round when David Raven entered the game and he almost had the perfect send off. He stopped the ball with his foot from a throw in, his second touch was a deep curling cross which was met full on by Carl Tremarco. Unfortunately he was denied by a tremendous point blank save by Bain as he met the cross and crashed a header towards the goal. The fans were now loving this and every touch by Raven was greeted with a cheer.

The goal rush was not finished yet though and when Liam Polworth bamboozled Andrew Black inside the box he was unceremoniously dumped on the turf. Richie Foran was quick to grab the ball and despite the fans chanting for Raven to take the spot kick, it was Foran that sent Bain the wrong way to round off the scoring.

Raven almost signed off with a goal but he headed over from six yards, much to the chagrin of the home fans. But we were in fine spirit now although Fon Williams had to look lively to deny Dundee a late consolation.

All in, it turned out to be a great afternoon especially in the second half as we went on a goal spree. Great send off for Raven who spent a long time amongst the fans getting selfies and autographs. John Hughes kept a low profile throughout all this, but the fans were left chanting David Raven's name, a fine tribute to an excellent servant to this club, and one that is leaving before his time.


Ross Draper was my MotM and Aberdeen target Miles Storey did well in the second half although it looks as though he has scored his last goal for this club. Marvelous memories of David Raven's last stand and the silence from Yogi was deafening. 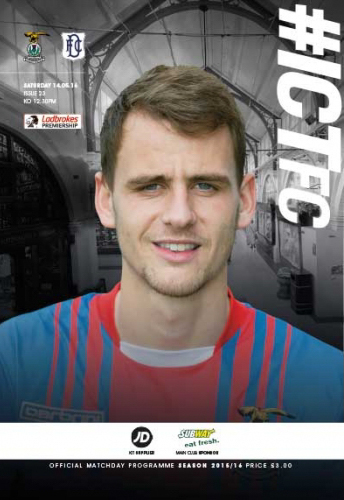