Inverness bagged their first win of the season against early pacesetters Hearts in an ultimately deserved 2-0 victory. It took a long time coming but we grew in confidence as the game went on and we were able to complete the job with a late clincher.

James Vincent opened the scoring after 49 minutes and debut striker Miles Storey capped a whirlwind display with an Andy Shinnie like finish in the final minute. This was no more than we deserved as we finished the game with a flourish, Hearts on the other hand finished the game with ten men after Oshaniwa appeared to raise his fist against the napper of our other new face Tobi Sho-Silva.

A very healthy away support swelled the attendance over the four thousand mark, no doubt looking to see if the Jambos could hit the top of the league, even if it might just be for one night ahead of the top of the table clash at Pittodrie.

It was great to have James Vincent and Josh Meekings back in the side to stabilise the erratic recent performances and newbie Miles Storey was plunged in at the sharp end to address our lack of goals. On loan midfielder Ryan Christie started and Carl Tremarco was at left back with Danny Williams floating further forward. This looked to be our best starting eleven available given our injury problems. Iain Vigurs was on the bench along with another new signing, Tobi Sho-Silva and club captain Richie Foran.

The visitors were pretty much at full strength and handed Danny Swanson his first start for his new club. Jamie Walker, Billy King and Gavin Reilly started on the bench.

A bright evening saw Inverness strut their stuff on a well manicured pitch, and it was the home side that started better, but as in previous games, lacking any goalmouth action. One obvious difference was the pace shown by Miles Storey who was chasing balls, giving us another dimension that had been previously lacking.

Hearts came more into the game after the first quarter and it looked as though it would be a repeat of the Hamilton game as errors began to creep into our play, offering Hearts the chances to get forward.

If truth be told, whilst it was an entertaining enough encounter, the big away support was probably all that was keeping this game from slipping below mediocrity as both sides struggled to get behind defensive barriers and I imagine some stern words would be spoken by both managers at the break.

Few first half highlights to report. Juanma tried to convince the referee he had been impeded in the box, aye right, and an appeal for handball against Ryan Christie who got in the way of a shot from a couple of yard distance on the edge of the box. Rightly dismissed and half time came without either keeper getting his hands dirty.

The pep talks seemed to get the message across that more was required and Inverness looked a yard smarter after the interval.

We worked the ball down the left through Danny Wiliams but he was denied a cross into the box. He then back tackled the defender and Christie picked up the loose ball. He flicked it between two Hearts players and surged past them before arrowing a low ball into the box. Plenty to do yet, but James Vincent has done this before getting in ahead of the defender to ram the ball into the net for our first goal at home this season. Relief all round and joy in the North Stand.

The game opened out after this but Fon Williams was still untroubled as Hearts were reduced to striking from distance, and striking them poorly at that. trundling a few wide of the mark.

It was similar at the other end as we looked to add the killer second goal, but there were plenty of stoppages for niggly fouls and play was being repeatedly halted. At 1-0 there was always going to be the danger of losing the lead, something we have done twice already, but Yogi had other ideas and went for glory.

Hearts sub Jamie Walker was lively when he came on and had a couple of attempts go wide and a jinking run into the box saw him prod the ball over. Yogi had seen enough and replaced Christie with Tobi in a bold move to get more out of this game.

He had a dramatic impact after entering the fray, flashing a header over the bar when he could easily have scored. The tall striker certainly looks to be one to watch as he was winning headers and going on mazy runs, dragging the tiring defenders around the park.

Hearts were still in it though and more misplaced efforts kept Inverness ahead as Iain Vigurs came on with fifteen to go, replacing scorer James Vincent.

Ross Draper almost became an unlikely hero as he drifted forward, leaving defenders in his wake, but unfortunately he could not pick out Storey or get his shot away and the moment was gone. Great work by the big man though.

You could sense something was going to give and it almost did in a goalmouth melee, Storey involved amongst others, but too many bodies got in the way and the ball was hacked off the line eventually.

Oshaniwa saw red after clashing with Tobi on the goal line whilst waiting for a corner to be taken. I hope Gary Cornish has a better chin than Tobi, but no excuse for the defender pushing his fist onto Tobi's head. From the corner that ensued he almost headed the second, but Bauben got in the way in front of the line and the ball deflected off him just wide.

We would not be denied though and Vigurs sent over a tantalising ball similar to Christie's for the opener and Storey picked up at the back edge of the six yard box. He shimmied and thrashed a left footer home from eight yards to settle the points and the jangling nerves.

Still time for Hearts to salvage some pride, but Patterson headed wide and the game had passed the Jambos by as Inverness recorded their first win of the season.

tm4tj MotM:- Tough one to call with a few players performing well. James Vincent got the sponsors award, probably for his goal on his comeback from injury, but he did have a decent game. Most of the plus performances came in a better second half and Christie, showed why Celtic bought him as he set up the opener. Carl Tremarco was another who showed up well, linking defending with providing the extra man wide left. New strikers Miles Storey and Tobi indicated that they will be a handful for the best of them and look to be an exciting prospect. Storey might even be quicker than Marley Watkins, but for me, MotM goes to Ross Draper for his industry up front and at the back, not to mention his Diego Maradona impression where he burst through the Hearts midfield into the box. Deserved better, but he is my choice for Man of the Match. 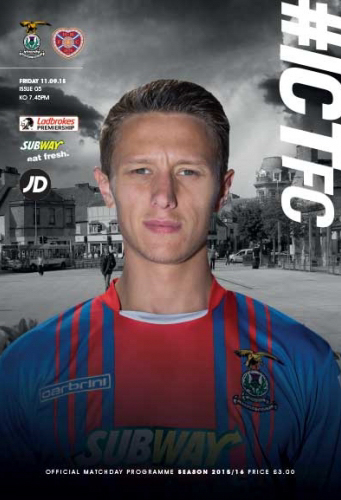