Inverness pay the penalty: Inverness were held to a 0-0 draw by newly promoted Ayr United who had been reduced to ten men after half an hour. Despite the numerical superiority we were unable to capitalise and wasted a few good opportunities to take all three points, including a missed penalty.

Prior to kick-off, a minutes silence was impeccably held in memory of Alan Hercher who died at the tender age of 52. Alan was our first club captain and scored our first, second and third goals with a hat-trick against Arbroath in 1994. How we could have done with Herchies drive in this game. RIP Alan Hercher 1965 - 2018.

The visitors took along a healthy support amongst the 2376 crowd and were looking for wanted man Lawrence Shankland to see them through the game.

Inverness were pretty much as expected with Nathan Austin and George Oakley up front and Jordan White, Aaron Doran and Daniel Mackay starting on the bench.

The hosts started brightly and buzzed around the visitors box without actually creating too much for keeper Ross Doohan to deal with, Tom Walsh going close but missing the target in the third minute. Unfortunately that would be a recurring theme for the afternoon.

Ayr's Daniel Harvie received a yellow card in the 13th minute that would come back to haunt him after half an hour.

Robbie Crawford called Mark Ridgers into action as the keeper saved his effort in the 17th minute as Ayr began to get to grips with the pace of the game with their hosts not able to penetrate their defence.

Harvie looked to push George Oakley over as he went for a high ball into the box and promptly got his marching orders from Andrew Dallas. Unfortunately Liam Polworth could not take advantage and directed his spot kick well wide of the post with the keeper going the wrong way.

Five minutes before the break Nathan Austin should have scored when put through one-on-one with the keeper. He also picked his spot with his shot, but unfortunately that spot was two yards wide of the post. Great opportunity that went abegging. He also managed to hit the keeper right on the break for a frustrating end to the half for the home fans.

We should have been at least two up at the break but through our own inability to hit the target Ayr went in at the interval on level terms.

Ayr came out of the blocks flying at the start of the second half and dangerman Lawrence Shankland used his strength and speed to good effect, but his angled shot went across the face of the goal with Ridgers scrambling across to cover it. Michael Moffat could also have opened the scoring but like everyone else he shot narrowly wide six minutes into the half. Robbie Crawford followed suit as Ayr looked for the opening goal.

Inverness gradually came back into the game and Joe Chalmers stung the palms of Doohan. His shot had plenty of power but was too direct at the keeper.

Robbie Crawford tried his luck again as the game opened out and Coll Donaldson took matters into his own hands and surged forward a couple of times.

Plenty of effort from the hosts in the last half hour but we were unable to fashion any really clear opportunities. Donaldson fired a shot just over in one of his runs forward and substitute Jordan White could not quite direct a header on target, the ball landing on the roof of the net.

A flurry of corners came and went and Ayr managed to hold on for an excellent point for them.

A frustrating afternoon all round and to be honest this felt like a defeat, but credit to Ayr for having a go especially once they went down to ten men. Difficult to select a MotM from an Inverness perspective with nobody catching the eye. Shankland gave our defenders a hard time with his powerful play and quick feet as did Moffat and Crawford. Donaldson might just be our best player on the day after making a couple of early mistakes which he recovered to deal with himself. He was one of the few players to drive forward with any menace and gets my vote.

Miserable day for Liam Polworth not helped by some of our own fans venting their displeasure towards him with some unsavoury chants. Clean it up please.

Dunfermline visit on Tuesday night in the Challenge Cup. They surprisingly went down 3-1 at home to Ross County on Saturday. Expect a difficult game in midweek. 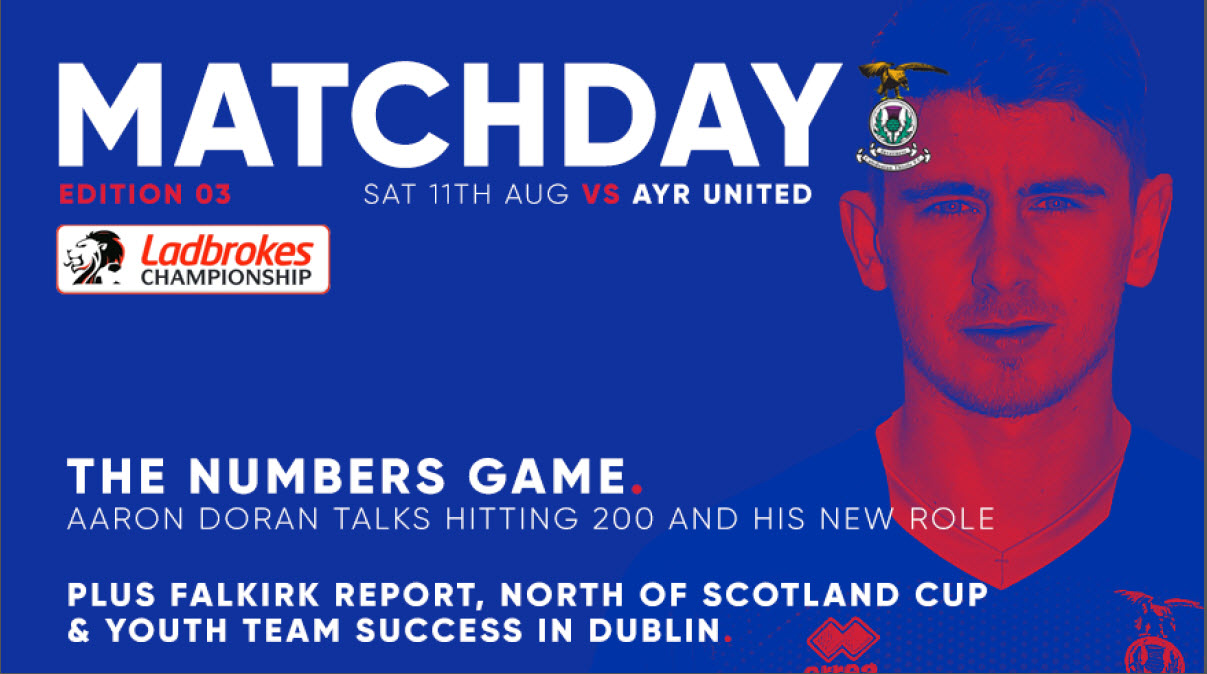